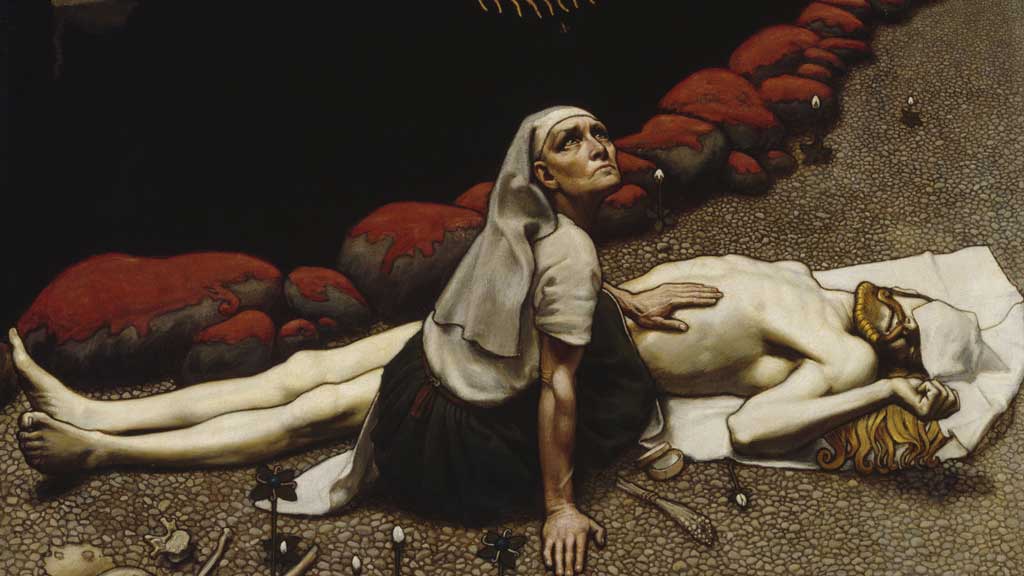 Lemminkainen a hero of the Kalevala

A prominent figure in Finnish mythology

But llmarinen was a wizard in his own right. He loved the daughter of Louhi, Sorceress of the North. The maiden loved him, too, but Louhi made the wooing a rough one: She charged the young man to defy death three times to win his bride.

His first trial was to plow a field full of adders. Shod in iron and guiding a golden plow, Ilmarinen furrowed the adder-ridden ground, singing the serpents out of his path. Then he entered the lands of the dead, seeking a bear and a wolf there with magic bridles, he took the beasts to Louhi. Lastly, from that same bleak region, the smith obtained a malevolent fish, as the sorceress demanded, capturing it with an eagle he forged and charmed to life. Thus Ilmarinen bested Louhi and had her daughter for his bride.

Other Kalevala characters also seek marriage with the daughters of Pohjola. When the proposer finally gets the daughter, weddings and great drinking and eating parties are held at the great hall of Pohjola.

Lemminkainen is a prominent figure in Finnish mythology. He is one of the Heroes of the Kalevala, where his character is a composite of several separate heroes of oral poetry. Lemminkainen is usually depicted as young and good-looking, with wavy red hair. The original, mythological Lemminkäinen is a shamanistic figure. In the Kalevala, he has been blended together with epic war-heroes Kaukomieli/Kaukamoinen and Ahti Saarelainen.

Thus when Finnish poets sang of Vainamoinen and llmarinen, they sang of Lemminkainen, too. Like Ilmarinen, he sought to win a daughter of the sorceress Louhi and like Ilmarinen, he dared the lands of the dead, bent on tasks Louhi had set as a bride price. But one of Louhi’s people was lurking there and, when Lemminkainen came, slew him.

In Finland, Lemminkainen’s mother, a sorceress herself knew at once of her son’s danger, but none of her arts could tell her what the danger was or where the young man had gone. So she set out to find him, heading north across the snow fields, traveling on foot and alone. She was a mistress of disguise, and if Louhi’s people had been on watch for her, they would have seen no more than a rabbit on a riverbank Ora gray wolf loping among the grasses of the fens.

At length, the mother found the path her son had taken. (The poets say that the sun told her the way, but that might be only the words they chose to express her skill with the lore of track and tree and stars signs.) She continued far to the north, crossing the border wastes, where the snowy meadows gave way to bone-littered scrub and shadow, and the winds never ceased their sobbing.

At last she came to the black water the poets called Death’s River, and from its bed she raked the piteous remnants of the body of her son. Working on the riverbank, she sang spells that made his body whole bolting the bones together and weaving the flesh. But he was cold Lemminkainen’s mother sang again, calling fiercely on powers that might animate him.

When she finally fell silent, his heart began to beat beneath her hand. Thus the mother gave life to the son again and, having done this, took him back to Finland and safety. But he never won the daughter of the sorceress.

Christfried Ganander, in his 1789 Mythologia Fennica, characterised Pohjola as ‘the most extreme North, described as a dark and terrible place. Comparable with the Greek Tartarus and Ultima Thule. In The Kalevala, Pohjola’s main function is to be the home of women whom the male heroes, from the land of Kalevala, seek as wives. As said the Mistress of Pohjola is Louhi, an evil witch of great power.

In a different story the great smith Ilmarinen forges the Sampo at the request of Louhi as a payment for the hand of her daughter in marriage. The Sampo is a magic mill of plenty like the Cornucopia, which churns out abundance, but its churning lid has also been interpreted as a symbol of the celestial vault of the heavens, embedded with stars, revolving around a central axis or the pillar of the world.

The foundation of the world pillar, also thought of as the root of the “world tree”, was probably located, from the Finnish mythological perspective, somewhere just over the northern horizon, in Pohjola. The pillar rested on the Pohjantähti or North Star (also known as the pole star in English).

The forging and hoarding of the Sampo and its abundance by the witch Louhi inside a great mountain in the dark reaches of Pohjola; the struggle and war by the people of the south to free the Sampo and capture it for their own needs and the subsequent shattering of the Sampo and the loss of its all-important lid (which implies the breaking of the world tree at the north pole) together constitute the bulk of the Kalevala material.