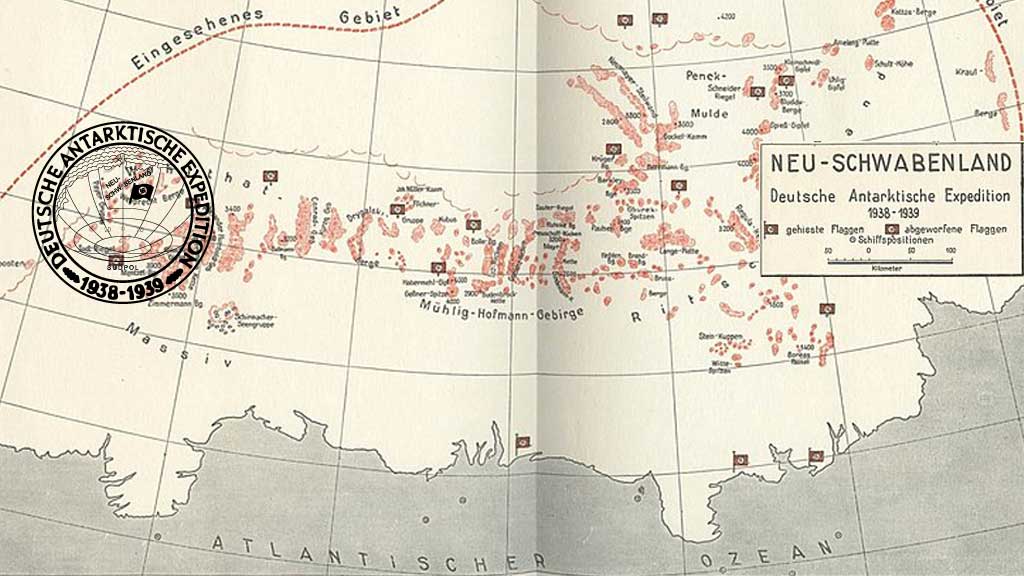 What is Happening in Antarctica?

Looking for Hitler’s secret base

What is going on there?

Ufologists are always describing UFO’s as originating in Antarctica.
Some believe Atlantis might be hidden deep under the ice of Antarctica. Nowadays numerous nations maintain research bases in Antarctica. Like many other countries, Germany sent expeditions to the Antarctic region in the late 19th and early 20th centuries. The third German Antarctic Expedition (1938–1939) was led by Alfred Ritscher (1879–1963), a captain in the German Navy.

The main official purpose of this German expedition was to find an area in Antarctica for a German whaling station, as a way to increase Germany’s production of fat. Whale oil was then the most important raw material for the production of margarine and soap in Germany. On 17 December 1938 the New Swabia Expedition left Hamburg for Antarctica aboard MS Schwabenland. On 19 January 1939 the ship arrived at the Princess Martha Coast. There they began charting the region and planted Swastika flags in the sea ice along the coast.

The expedition established a temporary base and in the following weeks teams walked along the coast recording claim reservations on hills and other significant landmarks. These explorers named the area Neu-Schwabenland after the ship. And some maps still use the name Neuschwabenland (New Swabia).

During the Second World War the German base at Neuschwabenland was still active. Some claim that after the war this base may have given a final shelter for some National Socialist die-hards.

Did the Germans locate their base in Antarctica because the Ahnenerbe organization discovered proof of a lost civilization? Or did the Germans or any of the other nationalities involved in Antarctica make contact with an extraterrestrial presence located on that continent? Dr. Michael E. Salla revamped this space being theory.

Geologically speaking, a huge rift valley, which runs from the South Pole toward Africa, then up East Africa to the Dead Sea, splits Antarctica almost in half. This entire rift valley is overflowing with geothermal activity. Due to this, the entire region contains many water ponds which never freeze over.

The Germans called these hot water ponds Schumacher ponds. It is not hard to believe that a sustainable base could be located over one of these geothermal vents or deep within a large crevice or cave. Also located in a glacial environment, the Icelanders rely of geothermal energy to produce electricity for their daily needs. Why could not have inhabitants of Antarctica?

But recently much more strangeness has been uncovered in Antarctica! There’s still some fuss over the mysterious lake Vostok. (1.2 Km beneath the Continental Ice Sheet and up to 600 meters deep.) Thermo-graphic images from space yield a water temperature of 10 degrees Celcius as an average with hot spots going up to 18 degrees (65 degrees Fahrenheit).

Moreover this lake is completely hidden from view. This is because there is a roof of ice over the lake, forming a dome, which is up to 1.5 km in height. This opaque dome admits sufficient sun light during the summer months to enable a mysterious, twilight world of continuous morning light. It is literal a lost world.

Lake Vostok is one of those poorly kept secrets that no government really wants to deny but, at the same time, doesn’t really want to talk about. For example the Jet Propulsion Laboratory (JPL) announced in January 2001 that it has terminated all further study of Lake Vostok in Antarctica and deferred study to the National Security Agency (NSA). This environment, it seems, may duplicate or at least approximate a frozen moon of Jupiter, covered by a frozen sea and bottom-heated by geothermal energy. Isolated for millions of years, Lake Vostok could also provide some answers concerning the evolution of life on earth. More on this in a Space.com article: https://www.space.com/14552-antarctica-lake-vostok-europa-life-jupiter.html

But why would a U.S. security agency, namely the NSA, care about what is going on at the South Pole? Isn’t it a bit south of the U.S. border?

Henry Stevens, a notable researcher and author of ‘what happened to Nazi technological inventions’, addresses this question. After the war the Allies believed many ‘Nazi’ scientists and elite troops survived the war and established themselves in one or both Polar Regions. This possibility led the U.S. military to take action.

According to Stevens, the intriguing curiosity dates back to the illustrious yet short-lived ‘expedition’ of Admiral Byrd in 1946. (Operation High Jump) The admiral led four thousand military troops from the U.S., Britain and Australia into Antarctica. But they encountered heavy resistance and had to call off the invasion due to significant casualties. Besides that very intriguing history, Byrd identified an impressive magnetic anomaly measuring 1000 nano-weber (nWb) of difference with the nearby area. Maybe this more recent effort of 2003 is probably related to this magnetic abnormality.

An answer as to the origin of this vast magnetic disturbance is the presence of a massive amount of metal. Metal as in a buried city. Is this metal the remains of Atlantis? Or could it be the underground city said by some to have been built by the Germans, Neu-Berlin? Maybe an extraterrestrial base? With the NSA taking part, the sole thing for sure would be the fact that we won’t find the answer to this enigma anytime soon.

Stevens comments: The U.S. military spent huge amounts of time, money and manpower in the years following the war in secret missions, flying over the Arctic.  This is no secret now since we have the testimony of Col. Wendele Stevens who took part in these operations while serving in the USAF.  In these operations, B-29 bombers were outfitted with the latest electromagnetic sensing gear and flown all over the Canadian Arctic allegedly looking for “flying saucers.” According to Wendele, when they were sighted, they were filmed and the film and recorded measurements were spirited way to Washington D.C.  Nothing was ever heard of them afterward.

To top off the fantastic story, another researcher cited by Stevens suggests that the U.S. finally had had enough trouble from the location and used a new type of atomic weapon, a ‘boring atomic weapon’ at the very time of the Iraq invasion (March 19-20, 2003) serving as a perfect cover for such a covert operation at Earth’s ‘bottom’. While Stevens doesn’t endorse the view of this researcher Christian Saal, he does agree the seismological data from this site, coinciding as it did with the opening salvo in Iraq (aka ‘Shock and Awe’), begs the question of what was then happening at the South Pole, especially given its mysterious history and ongoing scrutiny of the NSA.