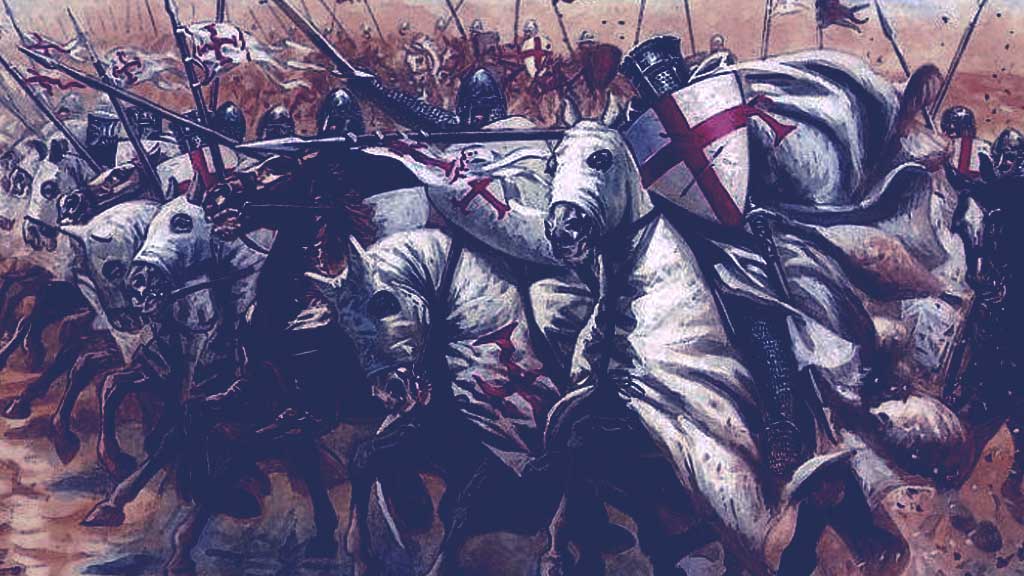 The Templars: The Secret History Revealed

The Order of the Knights Templar was dissolved by Pope Clement V at the beginning of the fourteenth century. From its humble beginnings, this society of warrior-monks grew into an extraordinary military and financial power. Eventually, a king wanted to get rid of this order, which had become a state within a state.

He selected the appropriate inquisitors, who gathered random rumors about the order and composed a terrible mosaic: depraved crimes, unmentionable heresies, corruption, and a dash of homosexuality thrown in for good measure.

The state, at the direction of the inquisitors, arrested and tortured the suspects. He who confessed and repented saved his life; he who declared himself innocent ended up on the scaffold.

Finally, the king confiscated the immense properties of the order. This, in sum, was the process King Philip IV of France, also known as Philip the Fair, implemented against the Knights Templar.

And the Templar myth was born. Many at the time were deeply shaken by the concentrated attack on and subsequent demise of the Templars. Beyond sensing its injustice, as was the case even with the great poet Dante, many today remain fascinated by the secret practices attributed to the Templars and wonder about the vast majority of knights who did not die at the stake but simply vanished when the order was disbanded.

Contrary to the conclusion that they went into hiding, built lives for themselves, and maintained their silence, there is the more sensational fictional interpretation: they went underground and continued their activities for seven centuries—and are still among us.

There are numerous books on the Templars. The only problem is that in 90 percent of the cases (I correct myself, 99 percent), they are pure fantasy. No other subject has ever inspired more hacks from more countries throughout time than the Templars. There are countless books about their continuous rebirth and their constant presence behind the scenes of history—among the Gnostic sects, satanic fraternities, spiritualists, Pythagorean orders, Rosicrucians, enlightened Masons, and the Priory of Sion.

Sometimes these efforts are so obvious that the reader endowed with common sense can enjoy these books as the historical fiction that they are, as with The Da Vinci Code, which mimics and reworks all the previous literature on the subject. But we must be careful, because thousands of gullible readers then visit the site of another historical hoax, the town of Rennes-le-Chateau. The only way to determine if a book on the Templars is serious is to check if it ends in 1314, the year their last grand master was burned at the stake.

Arcade is publishing in English for the first time a thoughtful and welcome antidote to these literary frauds: The Templars by Barbara Frale, a Vatican Secret Archives historian and scholar who dedicated years of research and writing to this subject. This is a book we have been waiting for, a terrific, entertaining read backed by solid scholarship.

Frale is not scandalized by some of the later aspects of the Templar myth. In fact, she views some of the fictional developments with sympathy, but only because they can lead to new, serious research on obscure aspects of the real history of the Templars. For example, is there really a connection between the Templars and the cult of the Holy Grail? It is a theory not to be dismissed, given that a Templar contemporary, Wolfram von Eschenbach, told fables about it.

But I would note that poets, as Horace can attest, are allowed some license, and a scholar from the next millennium who discovers one of today’s movies that attributes the discovery of the Ark of the Covenant to a certain Indiana Jones would not have good reason to draw from this entertaining invention any conclusions that are historically correct.

Barbara Frale’s stunning discovery of the long-lost Chinon Parchment in the Vatican Secret Archives allows us to see in a new light the church’s role in the process against the Templars. When Clement V disbanded the order in 1312, he forbade any attempt to restore it without papal consent, threatening with excommunication anyone who uses the name and the distinguishing symbols of the Temple (in 1780, Joseph de Maistre used this very argument against the neo-Templarists of his time).

The Order of the Knights Templar was recognized by the Roman Catholic Church and by the various European states, and as such it was formally dissolved at the beginning of the fourteenth century. Here is Barbara Frale’s fascinating account of the medieval world’s most powerful military order, one that continues to captivate the popular imagination.

At its height, the Order of the Knights Templar rivaled the kingdoms of Europe in military might, economic power, and political influence. For seven hundred years the tragic end of this religious military order amid accusations of heresy has been shadowed by controversy, in part because the record of the Templar leadership’s trial by the Inquisition — which held the key to the truth — was lost.

In September 2001, I (Barbara Frale) was reading for the thousandth time the inventory of documents on the trial of the Templars in the Vatican Secret Archives. It’s no exaggeration to say I knew it by heart, having studied it since 1994, while I was at the Vatican School of Paleography, and countless times during my four years in the doctoral program at the University of Venice.

But it wasn’t until that day that I noticed a most curious fact in one particular document: at the diocesan inquest in Tours, one of the many local hearings throughout Christendom that Pope Clement V had ordered to be held on the Templars, the questioning was directed by Cardinal Bérenger Frédol. There was something very odd about that.

The cardinal was an eminent canon lawyer, a papal legate for the most delicate diplomatic missions, a prominent member of the College of Cardinals, and a nephew of Clement V. Could a person of such stature actually take his leave from the Curia, the central governing body of the Roman Catholic Church, and head off to some provincial backwater to direct one of the hundreds of diocesan inquests?

A closer examination immediately made everything clear. This was no ordinary diocesan inquest. This was a hearing held by three plenipotentiaries — or representatives invested with full power or authority — of Clement V in the secret quarters of the castle of Chinon concerning Grand Master Jacques de Molay and other leaders of the Order of the Knights Templar. King Philip IV of France had sequestered the Templar leadership there in order to keep them from meeting with the pope.

This was the very trial that had been in dispute for so many years. Because all the evidence for the trial had come from indirect sources, many questioned whether it had actually taken place. The document, known as the Chinon Parchment, had always been in the Vatican Secret Archives, but in 1628, it had been cataloged merely as a record of an inquest “in the diocese of Tours.”

This was an accurate classification at the time, because in that period Chinon Castle was in the diocese of Tours. For modern scholars, however, the description was incomplete and misleading, so the true historic relevance of the Chinon Parchment remained unrecognized for nearly four hundred years — until that day in September 2001.

A close reading of the text left no doubt. The Chinon Parchment is the record of the trial of the Templar leadership by the pope’s personal representatives. It contains details of the order’s secret initiation ceremony, which had fueled great scandal. More important, it reveals that the grand master and other high-ranking Templars were found innocent of the charges of heresy, were absolved for less serious offenses by the apostolic authority, and were fully reintegrated into the Catholic community.

Historians believed that the Templars were innocent of the charges brought against them by Philip IV, but many outside academia still suspected the Templars of having been heretics and occultists. The Chinon Parchment is the definitive and incontrovertible proof of the Templars’ innocence, and should finally put this question to rest.

This book reexamines the medieval world’s most powerful military order in light of this groundbreaking new information. In the pages that follow, I trace the religious, sociocultural, and political developments that gave rise to the Templars, their remarkable ascendance, their many achievements, and the struggle for dominance between church and state that ultimately led to their spectacular fall. I begin by assuming the perspective of a Christian at that time to introduce some of the commonly held beliefs and traditions of medieval Christendom, from which the Templars sprang.