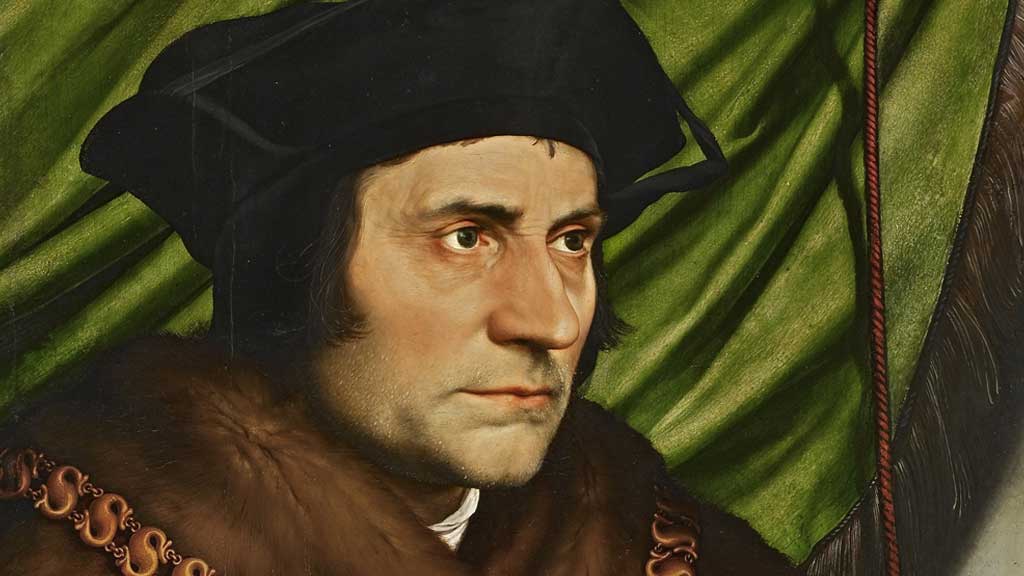 Known to some as Sir Thomas More and to others as Saint Thomas More, the author of 1516’s Utopia—and inventor of the word utopia itself—lived from 1478 to 1535. He was a man of great conviction, deep Catholic faith, and remarkable rhetorical skill. It’s not often possible to trace the origins of an entire literary genre (Utopian and Dystopian Works of Literature) back to a single work.

Thomas More was, by training, a lawyer and a social philosopher. He had studied all the Greek philosophers. His Utopia speaks back, especially, to Plato’s Republic. The Republic, written in approximately 380 B.C., is widely considered to be the first written text to thoroughly describe what we might call a utopian society.

The Republic is not a novel. It’s completely abstract, talking about the possibility of a better society as just that: an intellectual exercise. More’s book isn’t a novel either, but it’s a lot closer to one: It has somewhat concrete characters, a setting (the island of Utopia), and was reasonably accessible to a 1516 audience. It was written in Latin, using the conversational, everyday prose of a well-educated Renaissance man.

Utopia doesn’t have a plot exactly, but the philosophy is framed as a conversation, and we as a reader have a point of identification. This means that although we are presented with a clear argument about how to get to a better society (imitate the beautiful island of Utopia!), there’s enough irony throughout the text that the reader is left to wrestle with figuring out what does and doesn’t make sense in this society.

We tend to think of More’s book as containing a detailed description of a fictional island, but that’s just book 1. There’s actually a long introduction before we get to the island, and there we see the establishment of two conventions common to utopian literature: the frame narrative and the use of meaningful, allusional names.

Book 1 is written in Socratic dialogue, a common form of the day and one in which Thomas More was especially adept. The characters taking part have interesting names. Take Raphael Hythloday. Raphael, of course, is a biblical name, and the archangel Raphael is associated with healing and protection. Hythloday, by contrast, is a Greek compound that means “expert at nonsense.” His name suggests earnestness and nonsense, which gives us a good introduction to the paradoxes of this text.

Hythloday is talking to a man named Thomas Morus, a character with a Latin version of the author’s name. Note that Thomas Morus the character has some views that are in sharp contrast to those of Thomas More, author and cleric.

At first, Hythloday argues that the king can maintain control through a tight control of resources, a position associated with Aristotle’s Politics.

But then, he immediately argues a different approach, one more closely tied to Thomas More speaking in his own person: A king should fundamentally control resources but keeping people poor only leads to rebellion and unrest.

There’s no agreement at the end of book 1 …

Similarity between Utopia and England

The relationship between the fictional and real world, the focus on the didactic over the narrative, and a set of clear prescriptions (although these might be undercut) for setting up a better society.

Utopia connects the fictional and the real. Though it’s shaped like a crescent moon, the island of Utopia bears striking similarities to England. Utopia has 54 city-states, with one, Amaurot, serving as the city in which much of the centralization of the society occurs.

England isn’t shaped like a crescent, but it’s almost exactly the same size as the island of Utopia. Furthermore, it had, at the time, 53 counties plus London, similar to Utopia’s 54 city-states.

Despite all the levels of framing in Utopia, the text as a whole seems to encourage utopian dreaming. This leads us to another convention: the balance of the narrative and the didactic, with an emphasis on the didactic.

In Utopia, the island of Utopia basically has a functioning communist economy. Hythloday tells Morus the good people of Utopia work only six hours per day and yet they have everything they need for a fulfilling life. How is this accomplished when in Renaissance England, a roughly equivalent island, millions of people live in destitution?

First, there is no money in Utopia. There’s no need, since all goods are centrally held, to be drawn by citizens as needed. The Utopians also have huge stores of coins and rare jewels, even though they disdain these. They adorn their slaves and convicts with jewelry, just to ensure that citizens internalize the belief that these items are of no value whatsoever.

The second reason for Utopia’s great wealth is that the entire population works. As Hythloday says in part, “You will easily appreciate … how large a part of the population in other countries exists without doing any work at all.”

Epictetus and his guidelines to be free!

Hythloday does address the question of who produces food, explaining that each citizen spends some time learning agriculture. But citizens do not participate in one central agrarian act: the slaughter of animals. The butchery of animals is performed by the slaves.

Hythloday initially tells Morus that each citizen labors only six hours per day due to efficiencies created by women in the labor force and by citizens’ genuine engagement with their work, but that doesn’t fully explain it. In addition to slaughtering animals, slaves “do all the particularly dirty and heavy chores.” That explains quite a bit.

Interestingly, Hythloday and Morus discuss the pragmatics of slavery, but not the ethics.

The discussion of slavery quickly turns to a discussion of two topics that may at first seem unrelated: marriage customs and criminal justice. Premarital sex is strictly forbidden, bringing shame to the household of offenders and a prohibition to ever marry. Unless the offender is pardoned by the prince, a common exception within Utopian criminal law.

The Utopians have much more gender equity than do the English of the period. Brides are not used as objects of exchange to cement political or economic ties between two families. Instead, potential brides, like potential grooms, have the option of refusing a mate.

In Utopia, adultery is the only crime that carries a fixed penalty: the strictest form of slavery for a first offense and death for a second. For all other crimes, there’s a nuanced approach, with the senate listening to the facts—straight from the offender, as there are no lawyers in Utopia.

At the very end of book 2, we go back to Thomas Morus, reflecting briefly on Hythloday’s account of the island. Morus tells the reader that he sees many of the Utopian customs and laws as “absurd,” especially the communal living and the moneyless economy.

And yet, here’s how book 2 ends: “I freely confess that in the Utopian commonwealth there are many features that in our own societies I would like rather than expect to see.”