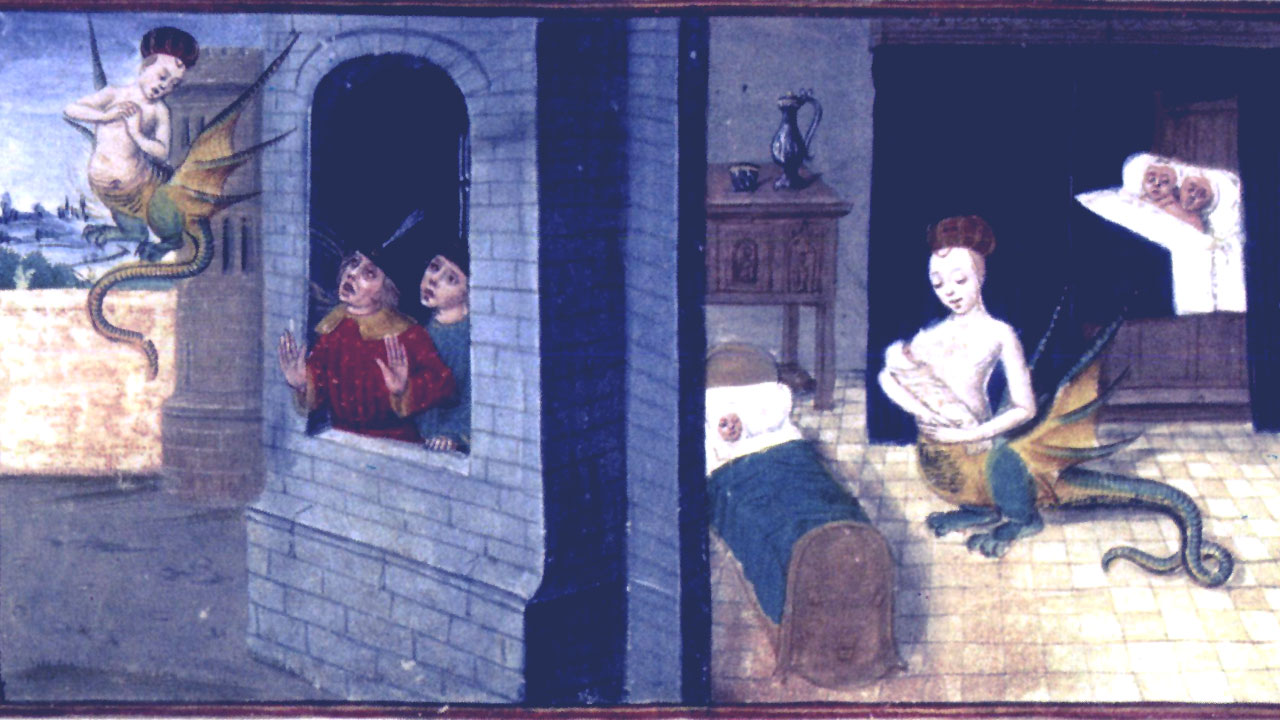 Melusine – The Noble History of Lusignan 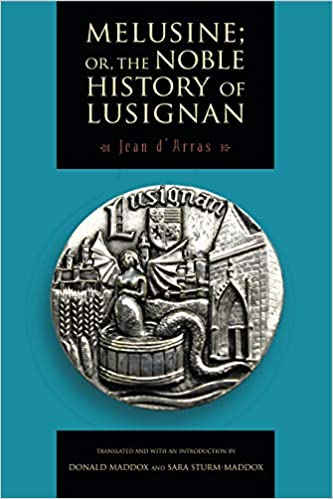 Melusine; or, The Noble History of Lusignan
Available at Amazon

Melusine; or, The Noble History of Lusignan has much to delight and fascinate anyone interested in the Middle Ages. No medieval history would be complete without an account of the illustrious Lusignan dynasty that lent its name to a fair city in the Poitou region of southwestern France, and played leading roles in the Crusades and in shaping the political landscape of western Europe during the late twelfth and thirteenth centuries.

Likewise, no history of the great literary milestones of the Middle Ages would be complete without taking account of the late fourteenth-century prose masterpiece we offer here, the romance of Melusine by Jean d’Arras. Writing under the distinguished noble patronage of Jean, Duke of Berry, Jean d’Arras masterfully retells the amazing story of the Lusignans in mythico-legendary dress, as a magnificent fiction of the dynasty’s founding by a supernaturally gifted Great Mother. The fairy Melusine is the marvelous architect of far-flung fortresses and castles, and the fertile mother of a stellar line of sovereign sons who bring to fruition the dynasty’s high lineal designs across the face of feudal Europe.

Completed in 1393, Melusine; or, The Noble History of Lusignan appeared during a period of European history marked by paradoxical extremes. On the one hand, there was widespread material death and suffering. As the fourteenth century was drawing to a close, Europe was still debilitated by the long aftermath of the Black Plague—which had begun in Italy in 1348 and rapidly swept across the continent, leaving in its wake a population diminished by nearly half—and for six decades France had been the theater of intermittent and costly military episodes of the Hundred Years’ War, which would continue for another sixty years.

Despite these protracted upheavals, the cultural vitality of fourteenth-century France was flourishing in myriad ways, particularly in the domain of arts and letters. One need only cite the court of King Charles V the Wise, who reigned between 1364 and 1380: it became a center of intellectual inquiry in many domains, and the king’s burgeoning library, the Bibliothèque du Roy, housed in the Louvre and numbering more than twelve hundred volumes, would eventually serve as the initial collection of the Bibliothèque Nationale de France.

In this tale that begins as a founding “fiction” concerning a historical dynasty, the most problematic element is, of course, the fairy Melusine. In his prologue, Jean d’Arras directly addresses the perplexity he anticipates from his reader. He himself, he tells us, has heard of so-called fairies that assume the winsome form of beautiful women and marry mortal men, imposing an interdict that would preclude discovery of their secret. Rather than challenge the credibility of such lore, Jean evokes similar reports in the writings of learned clerical authors of how supernatural women intervene in the lives of mortals. While acknowledging that there are indeed many phenomena that, even when seen, defy belief, his opinion is “that the marvels which occur on earth and throughout all creation are eminently true, including those things said to be the work of fairies or of enchantment, and a variety of others as well.”

The particular complexity of Melusine’s role, however, lies in the fact that she is not only a fairy–founder. Jean d’Arras gives her a story of her own, a destiny that plays out against the background of her connection with Lusignan, and in it both her fairy status and her corporeality are ambivalent. Both of these issues are established in the account of her origins early in the romance, which begins when a king in Scotland named Elinas weds a fairy, Presine, after promising her that he will never see her in childbirth. After he unwittingly violates this interdiction, he loses his wife and their three newborn daughters, Melusine, Melior, and Palestine.

When the daughters learn of his misdeed years later, they muster their inherent supernatural powers to enclose him forever within a mountain, for which their mother assigns each of them a terrible punishment. Now we learn that had they not imprisoned their father, in time his seed would have drawn all three of them to his human condition and they would have lived out their lives until death as mortal women. Jean d’Arras’s story turns on the punishment of Melusine, the eldest, who is transformed into a serpent from the waist down each Saturday. Her only hope of escaping this chronic condition, as well as her fairy state in general, is to marry a man who will obey an interdiction against seeing her on that day; in any case, she will found a noble and illustrious lineage.

Thus, from the outset, we learn that Melusine’s fate is precarious, while that of her lineage is certain. For its founding, Jean d’Arras gives her a mortal spouse, Raymondin, whose own story is tinged by the supernatural. His father, a young nobleman who had fled his native Brittany, had encountered a fairy in the region of Forez, with whose aid he built fortresses and towns and settled the land.

Following her disappearance, he married the daughter of the Count of Poitiers. One of their sons, Raymondin, accompanies his uncle on a hunting expedition during which the count, exceptionally well versed in astronomy, studies the skies and reads a strange adventure in the stars: if one of his subjects were to kill him at that hour, that man would later become the richest and most powerful of his line, and produce a distinguished noble lineage. During that same outing, Raymondin inadvertently kills his uncle while attempting to protect him from a charging boar, whereupon he flees in grief and in terror about what his own immediate future holds in store. When, soon thereafter, he meets Melusine in the depths of a forest, two singular destinies converge and the extraordinary story of the Lusignans begins.

It unfolds according to a narrative pattern, rooted in myth and folklore, that concerns the union of a human being and a fairy. Their bond is predicated on a covenant whereby the fairy promises her human partner love and prosperity as long as he respects the one taboo she prescribes; if he ever violates it, both she and the benefits she bestows on him are forever lost. Accounts of a similar nature are found in twelfth-century Latin and vernacular literature. Often such creatures do not appear in public, or play little or no role in the society of their chosen lovers; sometimes they even draw the latter with them into their otherworld.

Thus Jean d’Arras’s splendid prose romance of Melusine, written for Jean de Berry, the brother of King Charles V of France, is one of the most significant and complex literary works of the later Middle Ages. The author, promising to tell us “how the noble and powerful fortress of Lusignan in Poitou was founded by a fairy,” writes a ceaselessly astonishing account of the origins of the powerful feudal dynasty of the Lusignans in southwestern France, which flourished in western Europe and the Near East during the age of the Crusades. The spellbinding story of the destinies of the fairy Melusine, her mortal husband, and her extraordinary sons blends history, myth, genealogy, folklore, and popular traditions with epic, romance, and Crusade narrative.

src. Melusine; or, The Noble History of Lusignan

A superb new translation of the classic French masterpiece Melusine; or, The Noble History of Lusignan.

There’s always more than meets the eye! A good read!