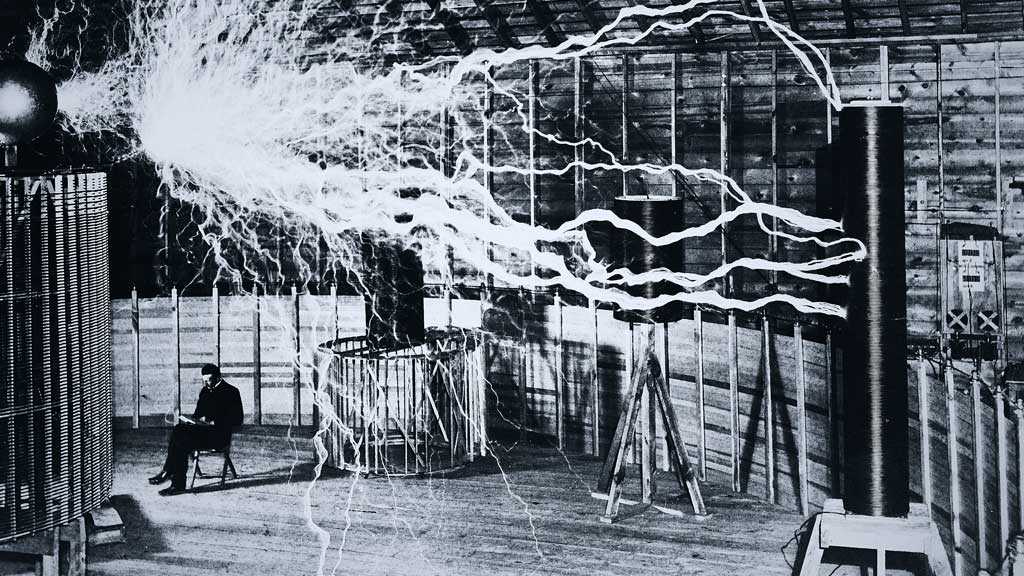 Born in 1856 and raised in the Austrian Empire (modern-day Croatia), Tesla received an advanced education in engineering and physics in the 1870s. He gained practical experience in the early 1880s working in telephony and at Continental Edison in the new electric power industry.

Nikola Tesla was a scientific genius, some of whose inventions have entered everyday life (he developed AC electrical current), some of which were madcap. Or were they? One of Tesla’s most infamous ideas concerned electricity that could be transmitted through the air without the need for wires. To this end, he developed the Tesla Coil, a device to create bursts of high-voltage electricity which could be beamed to receivers without the need for wires.

To receive a supply, all people would need to do was stick a metal rod into their backyard. Then relay the current to antennae on their electrical devices. According to conspiracy lore, Tesla’s wireless electricity scheme did not catch on because it was suppressed by big electricity manufacturers. Notably J. P. Morgan, who had hitherto been financing Tesla’s projects. “Where do I put the meter?” he famously asked Tesla about the latter’s “free power” scheme.

The scientific jury is out on whether Tesla’s coils are a possible global power source, but Morgan certainly pulled the plug on free power in Tesla’s lifetime. And suppression of customer-friendly electrical goods was hardly unknown in the USA. Time magazine reported in 1945 that Philips, Osram and GE had engaged in a conspiracy to suppress light bulb technology that would have produced cheaper and longer lasting bulbs.

Inadvertently though, Morgan may have done the world a favour by stopping the flow of dollars to the inventive Tesla. On Long Island, Tesla began construction of the monstrous Wardenclyffe Tower to run a “World System”. Combining wireless transmission of free energy and a global broadcasting system.

The mysterious sinking of the Iena

There was intense press speculation that Tesla’s invention was behind the mysterious sinking of the Iena in 1907.  And certainly Tesla’s boast that the tower’s beam was so powerful it could destroy a ship in seconds didn’t help to stop the rumors.

More recently, rumors tell that the 1908 explosion that wiped out half a million acres of Siberian forest was not, as officially claimed, caused by a piece of Enke’s comet hitting Earth, but a misfiring from Tesla’s Wardenclyffe Tower in which a colossal, trillion-watt beam of power went to the wrong place.

The tower was pulled down in 1917 because German U-boats were using it as a navigational beacon. Lack of money also put paid to Tesla’s 1934 plan for a particle beam weapon, which could knock aircraft out of the sky 250 miles away.

Tesla christened his new invention the “Peace Ray”. Because he considered it so terrible a deterrent that all wars would stop. Tesla never built the ray gun (he died in poverty in 1943). But in the 1980s by the Texan physicist Dr Bernard Eastlund revived the concept. – And, say conspiracists, by the mysterious Project HAARP of the US government in remotest Alaska.